10 Rare Video Games You Will NEVER Get To Play 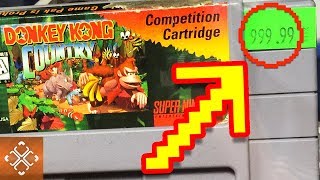 10 RETRO GAMES THAT COST MORE THAN THEY’RE WORTH. Video game collectors are an odd bunch. They’re willing to shell out thousands of dollars to buy games that aren’t always very fun.

This is TheGamer’s list of 10 Rare Games You’ll Never Get to Play.

WHAT DO YOU THINK:
– Have you ever paid top dollar for a rare collectible game?
– Do you know anyone who has?

Let us know in the comments section below!

Have the next amazing video idea? Submit it to us here: https://goo.gl/forms/hn6vV1Ic2PbfGnhx2

Depending on your gaming platform of choice, you might be used to spending anywhere from zero to $60 for a video game. But rare games are often much more valuable.

For instance, Stadium Events is one of the rarest games of all. It was only on the market for a short time before Nintendo bought the rights to it and rebranded it for the Power Pad. Or EarthBound, a classic RPG Nintendo launched to little success on the SNES. Its hero, Ness, would rise to fame later thanks to Super Smash Bros. Nintendo World Championships is a special game cartridge made for a tournament Nintendo held in the 90’s. It contains short sections of a few games and tournament winners got to keep their cart.

Legend has it that Atari buried a stockpile of E.T. cartridges in the desert because it sold so far below their expectations. Turns out the legend is true, but buying an unearthed cartridge will cost you big bucks. Mario didn’t just star in Super Mario Bros. in 1985. In the rare game Wrecking Crew, the plumber trades a wrench for a hammer as he knocks down walls. The Flintstones had a rare outing in a game that may have been exclusive to video rental stores.

Little Samson is a platformer that lets you swap between four characters on the fly. It has a lot of good ideas, but it came out so late, not many NES owners noticed it. Another late-comer on the NES is TMNT: Tournament Fighters, a fighting game that also happens to be the last game Konami ever made for the console. Bonk’s Adventure is a fun game about a caveman-child with a giant bald head. And Donkey Kong Country got a special limited release for a national tournament put on by Blockbuster.

Watch the video to find out even more about these rare video games you’ll never get to play.

Voice Over by: Justin Freitas