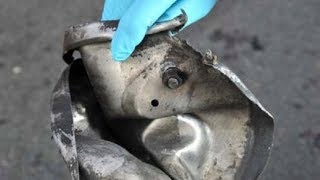 12 most dangerous household appliances! These everyday devices are dangerous & can cause health problems! From fires to explosions – these defective appliances can cause real damage.

12: Gas-powered appliances
Gas-powered appliances can be very deadly and dangerous without you realizing it. This includes gas-powered water heaters, furnaces, space heaters, and kitchen stoves. The problem comes in the form of carbon monoxide, an odorless gas that is released in defective gas-powered appliances. The worst part of carbon monoxide
11: Extension cords
They seem so simple and incapable of causing problems. An extension cord by itself is a safe household appliance, but the way it is often used – or rather misused – can make it dangerous. In fact, extension cords are one of the leading causes of house fires in the US. Many people don’t realize or tend to ignore the fact that there is a voltage capacity for power sockets, and plug in as many plugs
10: Ionization-type smoke detectors
Smoke detectors may save thousands of lives every year, and households would be a lot safer with them. But they still do carry some risks. Inside an ionization-type smoke detector is a radioactive material called Americium 241. This material ionizes the air surrounding it, and should the air come into contact with smoke, the alarm is triggered. Americium 241 emits alpha particles and low energy gamma rays
9: Refrigerators
That metal box which we use for keeping our food fresh has the potential to behave like a powerful bomb. Its compressor can explode, and you don’t want to be around the house when that happens. Compressors in refrigerators used to use chlorofluorocarbon (CFC), but these days they’ve been switched to hydrofluorocarbon (HFC), a gas that is more flammable. In case of any leakage, the compressor could easily catch fire and blow up. An old danger that refrigerators used to pose was the horrifying
8: Kitchen stoves and ovens
The dangers of kitchen stoves and ovens are obvious. Because of the nature of their use, they could easily cause burns and fires. In fact, most home fires are caused by these types of cooking appliances. According to the National Fire Protection Association, US fire departments respond to an average of 160,000 home fires every year that involve cook tops, stoves or ovens. Although some model units
7: Dishwashers
Dishwashers are full of hidden dangers, especially for little children. There’s scalding water running inside the machine, not to mention many sharp utensils and moving components that little hands may want to grab. For this reason, little kids should never be left unattended when a dishwasher is running
6: Microwave Ovens
Microwaves emit radiation of the non-ionizing type, so they don’t exactly pose the same risks as x-rays or other types of ionizing radiation. They can, however, heat our body tissues the same way they heat food. The thermal effects of microwaves can cause varying effects including skin burns, cataracts, testicular degeneration, and low sperm count. There are reports of people experiencing serious
5: Irons
Children could easily be burned by a hot iron, and one study showed that about 74 percent of such burn cases surprisingly occurred among young children who were under adult supervision. It is usually the hands that are hurt because children touch the irons. Also, their reflexes are not as well developed as adults, making them touch
4: Toasters
An estimated 700 people around the world are killed by these little machines each year, either by fires or electrocutions. Although all toasters are now manufactured with a built-in anti-jam and auto shut-off mechanism, they tend to fail after years of use and food buildup. Exposed electrical currents inside toasters can also cause fatal electrical shocks. It is wise not to stick metal forks or any other conductive cutlery into a toaster to remove jammed toast
3: Space heaters
It is estimated that space heaters cause at least 21,000 home fires in the US annually. Other dangers related to space heaters include electric shock, burns, gas leaks, and carbon monoxide poisoning. It is estimated that 95 percent of all carbon monoxide poisoning
2: Lightings
Household lighting could cause many accidents in a number of ways. Faulty sockets, poorly installed wires, loose fitting and faulty light bulbs can all cause electrical fires. Light shades that come into contact with light bulbs should also be watched. A knock could cause the two to collide, and the heat could start a fire. Also, fluorescent
1: Pressure Cookers
Pressure cookers are extremely convenient. They help us cook faster than conventional boiling methods, while saving more energy. However, the high internal pressure created inside the closed cooker could result in explosions. For this reason, pressure cookers are normally built with safety valves that ease the pressure