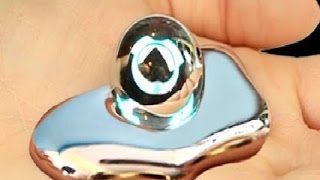 Here are the top 13 most fascinating elements explained, from the deadliest and most toxic to the elements with extreme reactions.

8. Arsenic
Arsenic is one of the deadliest poisons to naturally occur and can cause quite the number of health problems, if exposure is prolonged, such as heart disease, thickening of the skin, and cancer that will eventually lead to death. This is usually caused by people who come into contact with arsenic contaminated groundwaters which affects dozens of people around the world. Traces of arsenic can be found in certain organisms such as goats, rats, and even humans as they are a small essential dietary element.

7. Potassium
Potassium is the 19th element in the periodic table and it is labeled as being one of the alkali metals. Potassium also plays a key role in helping our bodies function and we can get our daily potassium requirements by eating fresh fruits and vegetables, most notably bananas. Believe it or not, we need potassium ions, as do all organisms with living cells, in order to have normal nerve transmission. Without them, we’d suffer from electrocardiographic abnormalities and an irregular heartbeat.

6. Aluminum
Or as it’s pronounced in other parts of the world, aluminium is a chemical element located in the boron group and it just so happens to be the third most abundant element that is found in the earth’s crust, after oxygen and silicon respectively. Aluminum is used in a plethora of common items that we use every day such as utensils, packaging materials, and in street lamps. The element can pose a serious hazard to those who are allergic to it and must be careful when using products such as antacids and deodorant. Welders are prone to inhaling aluminum fumes and aluminum powder which can eventually cause pulmonary fibrosis.

5. Gallium
Gallium is one of the more fun and playful elements and has been featured in a lot of Youtube videos where its physical properties are shown off to the audience. When gallium is rested on top of a person’s hand it begins to melt within around thirty seconds of making contact. This is because it has a relatively low melting point at a temperature that is greater than 29.76 degrees Celsius or 85.57 degrees Fahrenheit. And as we all now, or should know, is that the human body’s normal core temperature is usually 98.2 degrees when taken orally, so our body heat melts the gallium. It’s also capable of dissolving aluminum.

4. Mercury
Also commonly known as quicksilver, this is the only metallic element that is capable of being a liquid at “standard conditions for pressure and temperature.” The only other element that shares this similar property is bromine, except unlike mercury, bromine is a chemical element. Mercury is most commonly used in old fashioned thermometers that have been pretty much fazed out of modern use but it’s also used in dental restorations and in fluorescent lighting. Mercury poisoning is a serious risk when handling this element and it can be caused by inhalation, consuming, and coming in contact with certain forms such as methylmercury.

3. Caesium
The chemical element with an atomic number of 55, caesium happens to be an alkali metal and it is one of only five elemental metals that takes on the physical properties of a liquid when it’s at or near room temperature. Handling of this element must be done with great care as it’s known for being pyrophoric. For those of you that don’t know, anything that is pyrophoric just means that will spontaneously catch fire when exposed to air that is at a temperature of or below 55 degrees Celsius or 130 degrees Fahrenheit.

2. Curium
This element hails from the actinide series and it is so dangerous that it rarely ever gets produced here on earth. See, curium was first discovered back in 1944 by scientists at the University of California, Berkeley by smashing together plutonium or uranium with neutrons inside of a nuclear reactor. Curium is so immensely radioactive that it’s able to glow in the dark and as with anything radioactive can cause cancers in the body and eventually lead to death. The element is actually named after Madam Marie Curie and her husband Pierre Curie as they were both pioneers in the field of radioactivity.

1. Plutonium
This radioactive chemical element happens to be one of the most, if not, deadliest elements to ever exist. Just like curium, plutonium was first created and isolated at the University of California, Berkeley where a team of scientists led by Glenn T. Seaborg bombarded uranium in a 60-inch cyclotron. Labeled as Pu on the Periodic Table, Plutonium’s abbreviated name was actually just a gag name that Seaborg used and it happened to stick. Plutonium must be handled with extreme caution as the alpha, beta, and gamma radiation it releases as it decays can cause DNA damage, cancer, and death.