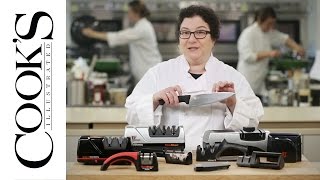 What if you could buy a knife sharpener that not only repaired the new breed of ultrathin chef’s knives but also honed the wider cutting edge of more traditional blades?

Are Carbon-Steel Knives Worth It? Watch now: https://youtu.be/e50gujs4l-I

Are You Using the Best Cutting Board? Watch now:

Japanese bladesmiths have long favored chef’s-style knives with blades that are ultraslim—that is, sharpened to about 15 degrees on either side of the blade—and for good reason: In addition to being thin and lightweight, these blades have a supernarrow cutting edge, which helps make them razor-sharp. We’ve also come to favor a thinner edge. After years of testing dozens of knives, our repeat favorite is from Victorinox, a Swiss-made knife that is sharpened to 15 degrees on either side of the edge, allowing it to push and slide through food more easily than do more traditional European blades sharpened to at least 20 degrees.

To maintain that narrow edge, we use a tool specifically designed to sharpen a blade to 15 degrees. Our favorite models, both from Chef’sChoice, are a manual and an electric sharpener that each do a fine job of restoring an ultrakeen edge to an Asian-style knife. But in recent years the trend toward slimmer knives—and slimmer knife sharpeners—has spread west, as European manufacturers including Wüsthof, Henckels, Messermeister, and Mercer have launched their own 15-degree knives and sharpeners. (In fact, Wüsthof and Henckels have discontinued their 20-degree knives.) We were curious to see what these new sharpeners had to offer—and were especially eager to test the claim of one that it can even hone a 20-degree knife to 15 degrees.

So we rounded up nine models (including our previous favorites), five manual and four electric, from both Western and Asian manufacturers and priced from roughly $20 to $200. To evaluate them, we bought nine of our favorite Victorinox chef’s knives and assigned one to each sharpener; we then dulled the knives identically and sharpened them according to manufacturer instructions. To assess sharpness, we slashed sheets of copy paper and sliced delicate tomatoes, repeating the dulling, sharpening, and slicing process four more times with multiple testers.

Each week, the cast of America’s Test Kitchen brings the recipes, testings, and tastings from Cook’s Illustrated magazine to life on our public television series. With more than 2 million viewers per episode, we are the most-watched cooking show on public television.
http://www.americastestkitchen.com

ABOUT US: Located in Boston’s Seaport District in the historic Innovation and Design Building, America’s Test Kitchen features 15,000 square feet of kitchen space including multiple photography and video studios. It is the home of Cook’s Illustrated magazine and Cook’s Country magazine and is the workday destination for more than 60 test cooks, editors, and cookware specialists. Our mission is to test recipes over and over again until we understand how and why they work and until we arrive at the best version.