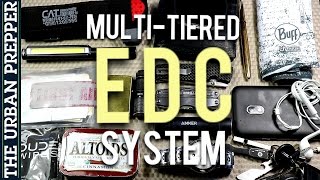 “EDC” stands for Everyday Carry. It is the set of gear that a person carries on a daily basis to provide them with a certain set of capabilities that best serves their needs. Many people in society (e.g., non-Preppers) just carry a basic set of gear like a smartphone, wallet and keys. They don’t even know the term “EDC”. Preppers commonly expand upon this concept by including additional gear that provide a greater set of capabilities, such as a small knife, flashlight and a multi-tool. An EDC should be specifically designed for the intended usage needs of the individual, and not just replicated from another person’s EDC. For example, someone who lives in an urban environment may choose to EDC a USB flash drive for the storage of electronic data. Someone who lives in a rural environment would probably not have any need for an item like that, but instead might choose to carry a compass or a fixed blade knife (fine for wilderness usage, but often times illegal to carry in some US cities). In my opinion, Preppers should start off with expanding their core EDC items (e.g., wallet, phone) with a pocket size flashlight and a cutting tool (e.g., multi-tool and or folding knife), and then continue to expand their custom EDC setup from there.

I prefer to view my EDC as a multi-tiered system of gear groupings based on priority. Tier 1 represents the core EDC items that are absolutely mandatory, and pretty much standardized in modern society. Tier 2 expands upon Tier 1 by including what I like to refer to as “Prepper Tools”. These two tiers represent my basic EDC configuration that I will carry on my person 99% of the time. Tier 3 expands upon the above tiers even further by including some add-on items that are more for redundancy in addition to added capabilities that are nice to have, but not necessarily mandatory. The items included in Tier 3 also require me to have additional pocket storage space available in my clothing, such as through wearing cargo pockets or a jacket (e.g., Scottevest). If I do not have either of those options available, I usually will just store the Tier 3 items in my EDC Backpack, which could be considered Tier 4 for a Prepper’s complete system. However, this document and the companion video will just outline the items that are carried in my pockets and not in any additional bags (e.g., backpack, sling bag).

email
Posted in Videos and tagged Electronics for Everyday