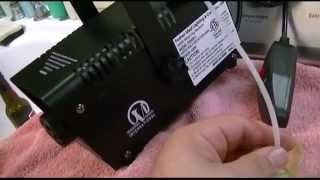 In desperation when my other fog machine went dead on me out of nowhere, I ended up ordering this “no-name” fog machine for too much money so I’d have a spare.

Subsequently I fixed my old one, so I’ll hold onto this one, because one day, one of the foggers will die completely and I’ll need something as a drop-in replacement.

Fortunately, many of these machines use a reverse-IEC plug on the back for status and control. That means this new one is a drop-in replacement for my current setup, with no rewiring required.

This new unit has a wireless remote, which in theory is a great idea, but unfortunately it was poorly implemented. Fog machines have to be in their ready state before they will fog. The way the wireless receiver was wired requires the fogger be ready before it will turn on via the wireless remote. The problem is once you leave the unit running until the temperature is not hot enough to vaporize the fog juice and the heating element has to turn on again, the fog machine goes to its not ready state, which shuts/resets the wireless receiver. That means you cannot leave the unit running constantly, because once the heating element comes back on, the receiver is reset, and you have to wait for the machine to reach the ready state again before turning it on via the remote, otherwise nothing will happen.

All in all it works like any other 400W fog machine I’ve had. The wireless auto-kill is going to be a downer for most, since there’s no way to leave the machine running, but since I have a timer I may be able to add the ability to get an extra blast of fog whenever I want. Even though the product fails, I win. Cool.