She Describes Her Life BEFORE 1900! And These Are Just Outtakes! 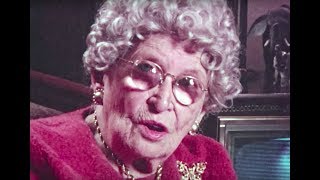 Please remember when you are watching this that you are watching 16mm work print outtakes from my 1979 prime time television special, The Information Society. unfortunately, the material that I selected as possible to be used, has been lost in my fire of 2008. This wonderful video presents what I was going to use, including a lot of irrelevant questions. I wish I had more of this. I wish I had been smart enough as a young filmmaker when I did this back in 1979 to realize the incredible history that she was so able to articulate. She was 98 years old when I interviewed her in Lancaster Pennsylvania. The time before the telephone. Before the radio. Certainly before television. The time when she traveled by train and trolley and horse. The time when people essentially stayed in their own towns and didn’t travel much. The time when the telephone was a device where everyone in town could hear everyone else speaking. I found this old 16mm workprint in my basement and digitized it not knowing it would be as wonderful as it is. I recorded this for a television special I was making in 1979 called “The Information Society.” You can see the entire 1 hour film on my YouTube channel by searching it although I did not use this clip in the film.