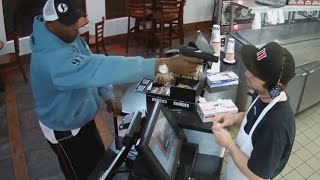 A Kansas City Jimmy John’s cashier was unbothered as a man pointed a gun at his face while robbing the store. The employee, seemingly unfazed, emptied the register for the robber, but not before taking off his gloves. In the video, posted by Kansas City Police, the suspect walks up to the service counter and pulls a gun out of the front pocket of his sweatshirt and points it at the cashier’s head. InsideEdition.com’s Keleigh Nealon (https://twitter.com/KeleighNealon) has more. #InsideEdition