What the Walmart video game department looks like in 2019! 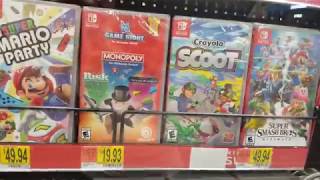 A look at a Walmart video game section in 2019. Check out all the latest video games for Nintendo Switch, PS4, Xbox One and more.

See a game you want? Let us know in the comments!

Check out the prices! Maybe a game or two in this video will be super expensive in the future! Won’t it be fun to look back at this and see it for so cheap? We think so!

This video was made for archive purposes. Imagine watching this video in 2029! It will look nothing like this, Walmart may not even have a video game section anymore. We thought it would be fun to capture what it currently looks like not only for the future but for people to compare it to how their store looks across the country.

After this was filmed we were stopped by employees and a police officer accusing us of recording security equipment. This is absolutely not the intention whatsoever! We only wanted to capture how the video game section of the store looks so we can watch it in the future and compare what video games are on the shelves when the ones in this video are long off the shelf.

We were not asked to delete what was filmed and they did not tell us that we don’t have permission to film. Because of this, we assume that we are allowed to share this after they realized we weren’t doing anything wrong.

This is not a Walmart commercial. We were not paid or sponsored by Walmart to make this video. Prices may differ at your nearest Walmart. Do not use this video to try to purchase something cheaper at your location.