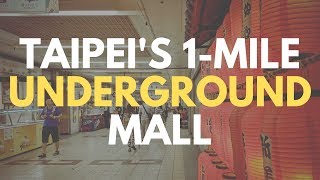 FPS: Episode 02
This is a long video! In this video I try to set it up as a FPS Games, that’s right…a First Person Shopper!

This is a complete walk around Taipei City Mall, an underground mall located under Taipei Main Station. Come along for the adventure and let me know what you think in the comments!

Have you been to this mall? Do you prefer shopping in other places in Taipei?

In Taipei Main Station Underground Mall, officially known as Taipei City Mall, you can find 1-mile of Taipei shopping places. Extending from Taipei Main Station to Beimen station at 0.5 miles (850m) so if you take a lap through the mall it’s 1-mile (1700m) of cheap shopping in Taipei.

taipei metro mall
In this Taipei shopping mall, you can find almost anything:

You can access this shopping area in Taipei as early as 8am. The lights aren’t actually on until 9am and most stores open at 11am. Official closing hours are at 9:30pm, but most shops begin to shut down at 8pm.

How do I know this? Because you can find me and a few elderly people walking around this Taipei shopping mall for exercise in the mornings.

Getting To The Taipei Underground Mall From Taipei Main Station Terminal
Head underground towards the Taipei High Speed Rail (THSR). Along the way you’ll see a sign for “Taipei City Mall” and follow the signs. It’s about a 5-minute walk from the terminal level.

Don’t be confused by the other malls through.

Getting To The Taipei Station Underground Mall From Beimen Station
The underground mall in Taipei is so big that it spans the length of a subway stop (850 meters). To experience the best of Taiwan shopping, start at Beimen station. It’s less crowded and it will be easier to find the underground mall Taipei.

Taipei Airport MRT sign
Within Beimen station, just follow signs for the airport MRT. After you make your first right turn from the MRT platform, there will be an entrance to “Taipei City Mall” on your left.