11 Difference Between Electrical And Electronics 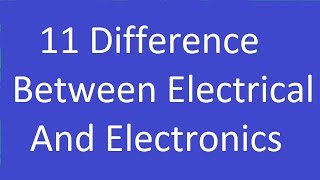 1. Electrical Engineering is the field of Engineering that generally deals with the study and application of electricity, electronics, and electromagnetism.
2. Electronics is often thought of as encompassing analog and digital and RF design and optoelectric and components,  as well as computer engineering and computer architecture.
3. Electrical devices mainly change current into another form of energy such as heat or light.
4. Electronics devices manipulate current in such a way so that it can do a particular task.
5. Electrical engineering majorly focus on the power supply and power generation whereas electronics engineering deals with the technical aspects of communication.
6. In electronics we generally deal in lower value of current (mA or so) and voltages(in V)in electrical we deal with higher value(kA and KV).
7. Electrical relates to producing or being operated by electricity where as electronic is commonly concerned with application of devices involving flow of electrons.
8. Electrical and electronics both convert current into another form of energy but electronic devices manipulate the current to produce useful results.
10. Electrical:
They use Alternate Current i.e. AC
Electronics:
They use Direct Current i.e. DC
11. Electronics deals with low power and electrical with high power.
12. Electronics is anything having to do with semiconductors, silicon or germanium, eg circuits involving diodes, tranistors etc(these regulate currents for better efficiency).While Electrical means generating electricity(major) and controlling it where no semiconductors are involved.

email
Posted in Videos and tagged electrical and electronic devices