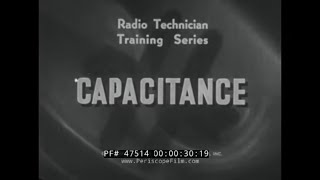 Love our channel? Help us save and post more orphaned films! Support us on Patreon: https://www.patreon.com/PeriscopeFilm Even a really tiny contribution can make a difference.

Produced by Burton Holmes Films during WWII, this black & white educational film is about Capacitance, the ability of a system to store an electric charge. It was made to educate U.S. Navy Radio Technicians and was probably standard viewing during training. Typical of government films made during the WWII timeframe, this film is outstanding in its use of both live action and animated sequences. Copyright is 1943.

Opening titles: United States Navy Training Film – Capacitance (:06-:32). Two uniformed men play pool. A narrator explains the flow of current. Animation shows a current flow. Resistor is explained. A pool table. Ball is hit by a pool cue. Pool balls on the table. I = E/R (:33-2:15). A resistor and a circuit are explained. Movement of electrons shown with animation between A and B. A is negative and B is positive (2:16-4:04). More energy being stored with larger plates is shown via animation. A man uses a capacitor. A hand unscrews a cap holding air in a tire. Air tank gauges. When valve is opened, air rushes out (4:05-6:01). A man connects a power supply and charges a condenser. Voltage is increased. Q is quantity of electricity stored. Plate spacing. The plate area (6:02-8:09). The dielectric is an insulating material or a very poor conductor of electric current. When dielectrics are placed in an electric field, practically no current flows in them because, unlike metals, they have no loosely bound, or free, electrons that may drift through the material. Glass is used as a dielectric. Two or more condensers are used (8:10-9:40). Voltage source increases. A man performs a test with wires and condensers. Large condenser equals a larger spark. A screwdriver captures the spark. Title: end of part one (9:41-10:55).

Title: Capacitance – Part two. A circuit with a battery and a condenser is shown. I = 6 volts divided by 1 ohm or I = 6 amps (10:56-11:57). I = 1.5 volts divided 1 ohm. Different current flowing opposing the battery voltage (11:58-13:24). Charge across the condenser builds up in a graph shown and explained. Farads, ohms explained. A graph shows a charge falling. T = RC, The RC time constant, also called tau, the time constant of an RC circuit, is equal to the product of the circuit resistance and the circuit capacitance. R – C Time Constant resistance machine (13:25-16:14). The machine is explained and gauges are shown. A man points out parts on the machine. An oscilloscope is a device for viewing oscillations, as of electrical voltage or current, by a display on the screen of a cathode ray tube (16:15-18:10). Oscilloscope’s screen, spot on the screen produces same curve as that on a graph. Man uses a marker on the screen (18:11-19:44). Close on the oscilloscope’s screen. One condenser is disconnected. Watch the meter. Resistance is cut in half. Resistance and capacity. Oscilloscope screen shows curve. Resistance regulates flow (19:45-21:55). Title: Capacity with Alternating Current. Condenser is reversed in animation. Alternating current is explained and shown via animation (21:56-23:21). The narrator amplifies his voice, he shows a microphone amplifier. Diagram of amplifier circuit at work. The narrator speaks to the viewer (23:22-25:28). End credits (25:29-25:38).

We encourage viewers to add comments and, especially, to provide additional information about our videos by adding a comment! See something interesting? Tell people what it is and what they can see by writing something for example: “01:00:12:00 — President Roosevelt is seen meeting with Winston Churchill at the Quebec Conference.”

This film is part of the Periscope Film LLC archive, one of the largest historic military, transportation, and aviation stock footage collections in the USA. Entirely film backed, this material is available for licensing in 24p HD, 2k and 4k. For more information visit http://www.PeriscopeFilm.com