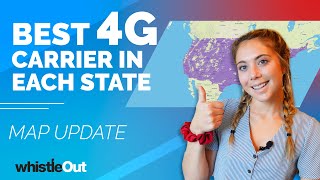 Which state has the BEST coverage? Today i’m taking your through each state’s coverage… and i’ll tell you which carrier is best for EVERY state in under 10 minutes. https://www.whistleout.com/CellPhones/Guides/Coverage I’ll show you an updated AT&T coverage map, and updated Verizon coverage map AND an updated T-Mobile coverage map so you can know the differences between all three.

For the moment, Verizon has the most coverage in the country at 71% 4G coverage.
AT&T comes in second at 70% coverage and T-Mobile is common in last at 62% 4G coverage. Now this isn’t make up all of their coverage maps.

Verizon with 71% coverage is great throughout the Midwest and the East Coast, when we get to the actual West Coast, it gets a little patchy in Montana, Idaho, Nevada and parts of California, but otherwise great coverage. If we flip on 5G, because Verizon does not have a ton of 5G at their coverage map doesn’t change a whole bunch and if we flip on 3G you can see a bunch of other spots filled in. So overall, a great coverage map.

Let’s take a look at AT&T’s coverage map. Now we can see that AT&T coverage map has a lot more gaps filled in on the East Coast. On the West Coast there are a few bigger gaps and that’s where Verizon really beats out AT&T, is Verizon has closed those gaps on the West Coast like in Wyoming, Montana, Idaho and Nevada. They have closed those in and AT&T really needs to work on that to step up their game, if they ever wanna get ahead of Verizon. Now, if we switch on 5G for AT&T, it fills in their map quite a bit And lastly, let’s take a look at T-Mobile.

If we just take a look at T-Mobiles 4G coverage map. it’s a lot more spotty than AT&T or Verizon’s especially on the East Coast and on the Southern border by Louisiana, Florida, Texas all along down there, it’s really patchy and then if we look at Nebraska, Wyoming, Montana, Idaho, Oregon, it’s a lot more patchy than AT&T or Verizon. So we can see really how T-Mobile 62% compares to Verizon and AT&T’s 70 and 71%. So that’s a quick look at the coverage maps, so now let’s go state by state to see, which state has the best coverage for you, depending on what state you are in.

So T-Mobile really dismal, honestly in this coverage performance right now, who knows in the next few months, they might really step up their game and increase their coverage overall, but right now AT&T and Verizon reigns supreme. Let me know what you think of this video, what do you wanna see more of in my next upcoming videos? Which carrier do you have? Do you love them for your state? Does my, does these percentages match up with the carrier you have for where you live? I’m really intrigued to hear about that. Let me know in the comments below. I’m Sherri Riggs with WhistleOut TV.