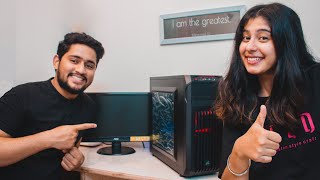 In this Vlog we are going to Vlog about Lamington Road. As we get ourselves a New Editing PC

Lamington Road, officially Dr. Dadasaheb Bhadkamkar Marg, named after Lord Lamington, the Governor of Bombay between 1903 and 1907, is a busy thoroughfare near Grant Road station in South Mumbai. The official name of the road is rarely used. It is often called the “IT hub of Mumbai”.
Lamington Road is famous for its wholesale and retail market in electronics goods. Shops on the street sell computer goods, electronic items, television equipment, and wireless equipment at rates much lower than the maximum retail price as they have a high turnover. They sell not only the latest computer related items but even outdated electronic parts for radios like transistors, capacitors, cables, sound cards, TV tuners and adaptors.

Mumbai, also known as Bombay the official name until 1995 is the capital city of the Indian state of Maharashtra. According to United Nations, Mumbai is the second most populous city in India after Delhi and fourth most populous city in the world after Tokyo, Delhi and Shanghai with a population of 21.4 millions as of 2016. As per Indian government population census of 2011, Mumbai is the most populous city in India with an estimated city proper population of 12.5 million living under Municipal Corporation of Greater Mumbai. However, the urban area of Mumbai city limits exceeds beyond the jurisdiction of Municipal Corporation of Greater Mumbai and covers Thane, Mira Bhayandar, Navi Mumbai, Kalyan, Dombivli, Vasai, Virar, Badlapur, Panvel, Pen, Ulhasnagar, Alibaug, Uran, Khalapur, Palghar, Ambarnath, Bhiwandi, Khopoli, Matheran, Karjat and Boisar. In 2008, Mumbai was named an alpha world city. It is also the wealthiest city in India, and has the highest number of millionaires and billionaires among all cities in India. Mumbai is home to three UNESCO World Heritage Sites: the Elephanta Caves, Chhatrapati Shivaji Maharaj Terminus, and the city’s distinctive ensemble of Victorian and Art Deco buildings.

The seven islands that constitute Mumbai were originally home to communities of Marathi language speaking Koli people, who originated in Gujarat in prehistoric times. For centuries, the islands were under the control of successive indigenous empires before being ceded to the Portuguese Empire and subsequently to the East India Company when in 1661 Charles II of England married Catherine of Braganza and as part of her dowry Charles received the ports of Tangier and Seven Islands of Bombay. During the mid-18th century, Bombay was reshaped by the Hornby Vellard project, which undertook reclamation of the area between the seven islands from the sea. Along with construction of major roads and railways, the reclamation project, completed in 1845, transformed Bombay into a major seaport on the Arabian Sea. Bombay in the 19th century was characterised by economic and educational development. During the early 20th century it became a strong base for the Indian independence movement. Upon India’s independence in 1947 the city was incorporated into Bombay State.

Mumbai is the financial, commercial and entertainment capital of India. It is also one of the world’s top ten centres of commerce in terms of global financial flow. Mumbai’s billionaires had the highest average wealth of any city in the world in 2008. The city houses important financial institutions such as the Reserve Bank of India, the Bombay Stock Exchange, the National Stock Exchange of India, the SEBI and the corporate headquarters of numerous Indian companies and multinational corporations. It is also home to some of India’s premier scientific and nuclear institutes like Bhabha Atomic Research Centre, Nuclear Power Corporation of India, Indian Rare Earths, Tata Institute of Fundamental Research, Atomic Energy Regulatory Board, Atomic Energy Commission of India, Department of Atomic Energy and the Indian Institute of Technology Bombay. The city also houses India’s Hindi (Bollywood) and Marathi cinema industries. Mumbai’s business opportunities, as well as its potential to offer a higher standard of living, attract migrants from all over India.
#milesonbike #strayartist #wheredowegonow