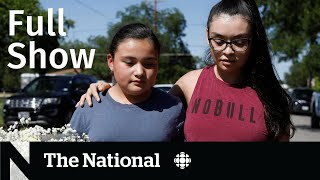 May 25, 2022 | Grief and outrage in the aftermath of a Texas school shooting that killed 19 children. Victims’ families in the Nova Scotia mass shooting plan to boycott the public inquiry over a ruling on RCMP testimony. Plus, calls for Canada to speed up the resettlement of Afghans.

Watch The National live on YouTube Sunday-Friday at 9 p.m. ET