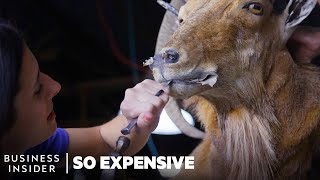 Texas ranchers have been importing exotic species, breeding them, and building numbers on desert ranches that often span thousands of square miles. We break down how trophy hunting in Texas became such a lucrative business.

Corrections: An earlier version of this video showed an image of a Grevy’s zebra when referring to hunting. We corrected this to show a plains zebra, which can be hunted legally in the US. Another image of a Grevy’s zebra suggested they can be sold for $4,500. We corrected this to $20,000. We also showed an image of a nyala instead of a kudu, which has also been corrected. We said it costs $14,000 to hunt kudu at Ox Ranch. This has been corrected to $19,500.

Business Insider tells you all you need to know about business, finance, tech, retail, and more.