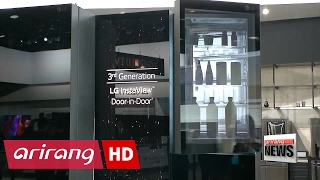 Korean electronics giants, Samsung and LG Electronics are enjoying a solid presence in the U.S. household electronics market.
With state-of-the-art technology and premium products, Samsung now has the biggest market share,… beating Whirlpool for the first time.
Kim Hyo-sun reports. A refrigerator that orders your groceries.

A robot that can turn on the vaccum or the oven.

“SOV”
“Okay, good. Pre-heat the oven.”
“The upper of the LG oven will start pre-heating.”

In the U.S., Samsung and LG Electronics have passed a new milestone, capturing the two of the largest market shares for five major household electronics items, including refrigerators and washing machines.
Korea’s number-one manufacturer of electronics, Samsung, topped the U.S. market last year for the first time with a 17-point-3 percent share,… beating America’s long-time industry leader, Whirlpool.
Korea’s second-biggest electronics maker, LG,… came in third place with 15-point-7 percent.
Their success overseas has been attributed to their continued innovation.

“Every year, we introduced new products by analyzing the tastes of American consumers, who prefer innovative and large-scale home appliances. Our strategy of focusing on premium products in major markets including washing machines and refrigerators also proved successful.”

Samsung and LG, who are also top players in the mobile industry,… have a lead in state-of-the-art Internet-of-Things technology and artificial intelligence.
However,… they can’t allow themselves to get complacent.
The Trump administration has hinted at high tarriff barriers, which could affect the two manufacturers who make some of their household electronics in Mexico.

“Because they’re more competitive in communications and display products, I think they can do even better when focusing on their areas of competitiveness while carrying out high-end strategies as well.”

Another challenge not likely to go away… is for them to stay ahead of their Chinese competitors who have been catching up fast.
Kim Hyo-sun, Arirang News.