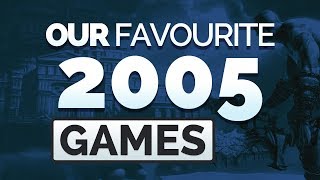 Our personal favourite games from 2005! On our Spirit of 2005 video, Matty mentioned that the top video games released in 2005 were all bangers. We wanted to put our money where our mouth is so we’ve played and reviewed Metacritic’s Top 10 video games of 2005.

However, our hearts know there were some 2005 video games that weren’t that highly rated and we like a lot more. And what I love most about video games from 2005 is the variety. We’ve got everything from gritty horror shooters to cute puzzle platformers in here.

Resident Evil 4 is not only the best video game from 2005, but one of the best games of all time. You don’t get released on 12 platforms, almost exactly the same, and still be a top seller on each by being ‘meh’. It was a bold move in a 2005 game to completely switch it up from the first RE trilogy to an over the shoulder shooter. In 2005, you had the choice of Gamecube or PS2.

Timesplitters Future Perfect’s levels Mansion Of Madness, The Russian Connection or Breaking and Entering in Future Perfect are up there with some of the best. The amount of content in Future Perfect is far beyond any other video games from 2005. We’re really surprised by the lukewarm metascore, but not enough to stop us from having a blast with it.

Although every video game from 2005 can be emulated to look better and the like, only Timesplitters 3 can actually play better. You can use a modified version of Dolphin with a mouse a keyboard and have a totally modern experience.

Battlefront 2 is one of the video games from 2005 that started putting the thought into my head that 2005 is the most creative year for mainstream video games. I feel like everything was just about perfect with Battlefront 2. Battlefront 2 Classic 2005 is £7.50 on Steam and GOG at the time of writing.

SW Republic Commando is basically Ghost Recon in space. It’s much darker and more violent than your usual Star Wars game and it’s a bit more involved than your usual shooter. ReouCom missed the mark when it came out in 2005. It’s a real hidden gem though, it does everything I’d want a shooter to do and you don’t have to know a thing about Star Wars to enjoy it.

Psychonauts is probably my favourite video game from 2005, all told. It’s absolutely typical of the Spirit of 2005. It’s a 2005 game that pushed creativity, fun and expression to 11. Perfect.

Although absolutely everyone on the planet remembers SSX Tricky, SSX 3 and SSX on Tour were the real best SSX games. The reason I say that is that they had everything Tricky had, plus loads more. As this is a list of best games from 2005, SSX On Tour goes in the list. Bonus points for Mario, Luigi and Peach

Phantom Dust was given away free on the Windows App Store after being originally released in 2005 on Xbox, NA only. My only option to play this 2005 hidden gem was importing a copy or bad Xbox emulation. It’s out of leftfield (we always have one), but this is a real treat if you’ve already played the top games from 2005 and want something different.

God of War is one of the only games to appear both on our list and on the Metacritic top ten video games from 2005. God of War 2005 is the product of another era. God of War is what the Spirit of 2005 is all about. God of War 2018 is probably a better game in all respects, but I don’t think it will leave the same cultural mark as the original God of War did in 2005.

Geometry Wars: Retro Evolved. What can you say about that except it’s a QUALITY GAME MATE.

Burnout Revenge isn’t necessarily our favourite Burnout game, but it is certainly one of our best games of 2005. The Burnout Series is a rare beast. Multiple games over multiple generations and yet the reviews stay consistently high. Burnout Revenge is fast, content-rich and very, very fun.

As a final caveat, we haven’t said that these are factually the best games of 2005. These are our favourite games from 2005. We’ve played the big hitters and we’ve played a lot more besides. So these are our top picks from 2005 video games that we enjoyed the most. Please tell us your favorite video game from 2005 below!