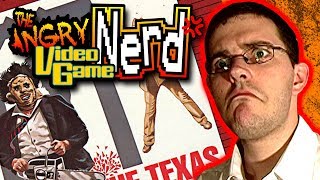 The Nerd faces the horror of a bad video game for his Halloween that he wishes he could cut apart with a chainsaw, as he reviews the Atari 2600 game based on The Texas Chainsaw Massacre. This is Angry Video Game Nerd Episode 35.

The Texas Chainsaw Massacre is considered one the greatest and most influential slasher films of all time. Although it was a big hit, it was also very controversial being banned in numerous countries for its excessive violence. Throughout the years, the chainsaw wielding maniac known as Leatherface would go on to become a classic horror icon.

In 1983 a game based on the movie was released by Wizard Video Games for the Atari 2600. It was one of the first horror movie video games and allowed the player to control Leatherface as he ran through a field brutally murdering young women. It was nearly as controversial as the film and many game stores hid it behind the counter or refused to carry it at all. Its poor success has made it one of the most sought after Atari games.

In part one of the Nerd’s second annual Halloween special, he purchases the game from a local seller for a review. After that he meets his most “far-out fan,” is captured by the Leatherface family and gets forced to play through even more of the mad and macabre, doo-doo diarrhea bulls**t of that sucky ass game.