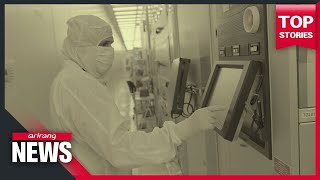 The first face to face summit between the current leaders of South Korea and the U.S. led to a number of tangible outcomes, including a further bolstering of economic cooperation.
There’ll be close to 40 billion dollars of investments by Korean companies in America, but the question is which states that money will go to, and there’s a good chance it’ll be Texas.
Seo Eunkyung has this report.
“The best trip, the best summit,” and “Never-before-seen outcomes.”
This is how South Korea’s President Moon Jae-in and Prime Minister Kim Boo-kyum described the summit with the United States.
South Korean ministers held a briefing session on Tuesday to share the results of the summit and discuss follow-up measures.

Trade Minister Moon Sung-wook said that the summit has allowed Korea and the U.S. to draw tangible achievements in the economic field, including the supply chain for key industries such as semiconductors.

“At the business roundtable on May 21st, the two countries reached a consensus over the need for cooperation in achieving a stable supply chain in core industries.
And… both governments have decided to proactively support the investment and cooperation of relevant companies regarding the matter.”

With South Korea’s major conglomerates unveiling their 39 billion U.S. dollars of investment plans in the U.S. during the summit, eyes are on which state will receive Samsung’s investment.
During a business roundtable the day before the summit, Samsung Electronics Vice Chairman Kim Ki-nam, said the company was planning to invest 17 billion dollars and build a foundry plant in the U.S.
That figure accounts for the largest share of the investment pledged by Korean companies.
Many in the semiconductor industry are predicting that Samsung Electronics will build an additional factory in Austin, Texas where the company already operates a foundry plant.
Since 1998, Samsung Electronics’ Austin branch in Texas have been mainly producing power semiconductor products for IT devices and other semiconductors for communication devices.
The company also purchased additional land near the factory at the end of last year.
In a letter of investment intent submitted to the Texas government, Samsung expected that the additional construction of a foundry plant would bring an economic effect of near nine billion dollars to the local economy, and create around 20-thousand jobs.
Samsung Electronics has declined to take an official stance on the issue, saying that “Currently, investment areas in the US are being reviewed and have not been decided yet.”
Seo Eunkyung, Arirang News.