These Phones Are Better Than Iphone X !!! Top 5 Best Smartphones in July 2018 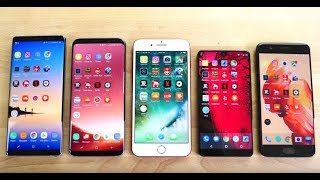 You won’t find a bigger and better Android phone than the Samsung Galaxy S9 Plus, thanks to its oversized 6.2-inch curved screen and low-light-defeating dual-lens camera. Sure, it looks exactly like last year’s S8 Plus, but it does fix the fingerprint sensor location (it’s now center-aligned on the back) and speakers (now stereo). The new AR Emoji mode is overrated, though, and its higher price is tough to justify. This is for people who want the biggest screen and the best camera on one phone.

The Sony Xperia XZ2 is the Japanese firm’s most recent flagship handset, but it refuses to follow in the footsteps of many of this year’s top-tier smartphones.

Sure, it has the high-end power under the hood, and a well-specced camera with a slow-mo party piece, but in comparison to its peers it has a resolution commonly found on phones half its price, and it isn’t afraid of showing us some bezel.

The Pixel 2 clues us in on why Google called its phone series Pixel: it was building the best camera on a phone. This second-generation effort fulfills that promise with not only the best-in-class photos, but also dual front-facing speakers and water-resistance. It’s a great size, but you’ll need to be okay with its dated looks and the fact that there’s no headphone jack.

The OnePlus 5 is no longer available, after it was replaced by the OnePlus 5T. A great camera, phenomenal performance and a premium design combine to make this a fantastic buy for anyone looking for a more affordable flagship phone.