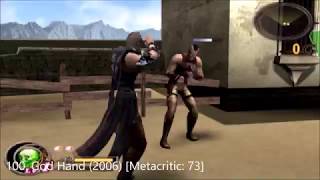 **CORRECTION: The correct Metacritic score for Metal Gear Solid 3: Snake Eater should be 91 **

I am personally not a fan of top 100 lists; they are waaaay to subjective and fanboy wars always break out. However, after my first “100 PS2 Games In 10 Minutes” video received about 3000 comments asking for God of War / Grand Theft Auto SA, etc, I created this one.

Having said that, the games on this list are generally pretty solid, if a little pedestrian.

Yes, a few of these clips are recycled from my other video (https://www.youtube.com/watch?v=N_aeYCZK9co). If you have not seen it already, I recommend you watch it to catch a glimpse of some lesser known PS2 classics.