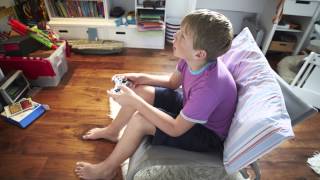 There is not necessarily a magical age in which it’s appropriate to begin introducing your kids to games. The studies that are currently available that have evaluated and measured the amount or the number of hours that kids are playing video games generally begins at around the age of eight, but really it comes down to a parent’s choice as to whether not this is an effective or appropriate media for their child.

Can video games promote a child’s development?
When it comes to the use of video games we see this benefit when it’s used in moderation. Now it is unclear whether or not that benefit holds true in that younger age group, but what we see in those older age groups is that the use of games, under an hour a day can actually foster creativity, problem solving, and improve social functioning.

Over that three hour threshold is where we start to see a great deal of impairment start to arise in their school functioning, family functioning and interpersonal functioning.

Can a child play longer if the game is considered “educational?”
I would not differentiate between educational games and allow more access to that verses more just simple more entertainment games. It’s important to understand gaming as gaming. Just like I would say screen time is screen time whether it’s on a telephone or an iPhone or a smartphone, or a tablet, or a TV.

I would also encourage parents to understand that this hour a day should also be within that two hour threshold that the American academy of pediatrics frequently sites as kind of a guideline to limit total media access of any kind for kids.

How does too much gaming affect a child’s development?
If you think about the number of hours or free time that is spent engaged in gaming they are not doing much else. So they are not engaged in other activities that would be normative for their age and developmental level. So the more they seclude themselves and engage in those solitary activities the less they are doing other age appropriate tasks and again where they should be spending time doing homework or doing chores, they spend time avoiding those areas which ends up causing impairment in their life.

How can parents manage their child and games?
It’s important to make sure children only have access to those video games after they have demonstrated to their parents they have done something different that is creative or constructive or social and then allowing them limited access to it again. They can always take back control of those games.

Creating and setting time limits, policing the content, watching it with their children and giving them more effective media literacy, parents can actually help stem those affects that may have developed as a result of that inappropriate amount of gaming. The good thing with parents when I talk with them frequently in my office is, we can always get better. The effects that may have been present with that gaming that was excessive and the problems that went along with it can always be corrected and we’ve seen that happen in a couple of longitudinal studies.For more information on Boys Town Counseling Services, visit http://www.boystownpediatrics.org/counselingservices/BehavioralHealthClinic/Pages/default.aspx
ription