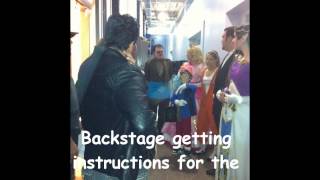 Pictures from my Video Games Live experience in January, including the cosplayers. Lots of loving from Tommy Tallarico and Laura Intravia.

Check out the rest of my channel for the videos from the show.

Music by “Anonymous person’ (Zelda – is not System of a Down as commonly believed), Nobuo Uematsu with Video Games Live performing One Winged Angel, and Jonathan Coulton’s “Still Alive” from Portal, taken from the Portal soundtrack.