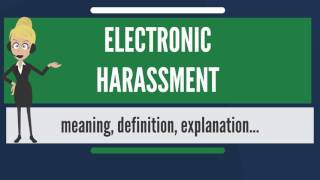 Electronic harassment, or psychotronic torture, or electromagnetic torture is a conspiracy theory that government agents make use of electromagnetic radiation (such as the microwave auditory effect), radar, and surveillance techniques to transmit sounds and thoughts into people’s heads, affect people’s bodies, and harass people. Individuals who claim to experience this call themselves “targeted individuals” and many have joined support and advocacy groups.

Medical consensus is that these experiences are hallucinations or the result of delusional disorders or psychosis, the same sources from which arise religious delusions, accounts of alien abductions, and beliefs in visitations from dead relatives. It can be difficult to persuade people who experience them that their belief in an external influence is delusional.

The experiences of people who describe themselves as undergoing electronic harassment using esoteric technology, and who call themselves “Targeted Individuals” (“T.I.”) varies, but includes hearing voices in their heads calling them by name, often mocking them or others around them, as well as physical sensations like burning. They have also described being under physical surveillance by one or more people. Many of these people act and function otherwise normally and included among them are people who are successful in their careers and lives otherwise, and who find these experiences confusing, upsetting, and sometimes shameful, but entirely real. They use news stories, military journals and declassified national security documents to support their allegations that governments have developed technology that can send voices into people’s heads and cause them to feel things.

Psychologist Lorraine Sheridan co-authored a study of gang-stalking in the Journal of Forensic Psychiatry & Psychology. According to Sheridan, “One has to think of the T.I. phenomenon in terms of people with paranoid symptoms who have hit upon the gang-stalking idea as an explanation of what is happening to them”. Mental health professionals say that TIs can experience hallucinations and their explanations of being targeted or harassed arise from delusional disorders or psychosis. Yale psychiatry professor Ralph Hoffman states that people often ascribe voices in their heads to external sources such as government harassment, God, and dead relatives, and it can be difficult to persuade them that their belief in an external influence is delusional. Other experts compare these stories to accounts of alien abductions.

Press accounts have documented individuals who apparently believed they were victims of electronic harassment, and in some cases persuaded courts to agree. In 2008, James Walbert went to court claiming that his former business associate had threatened him with “jolts of radiation” after a disagreement, and later claimed feeling symptoms such as electric shock sensations, and hearing generated tones and other strange sounds in his ears. The court decided to issue an order banning “electronic means” to further harass Walbert.

People who describe themselves as undergoing electronic harassment have committed crimes and mass shootings.

Fuaed Abdo Ahmed, a 20-year-old man, took two women and a man hostage at the St. Joseph branch of Tensas State Bank on August 13, 2013, eventually killing two of them and then himself….