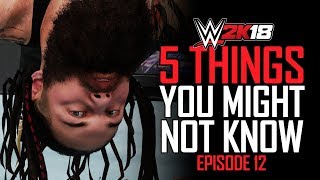 Here we go with episode TWELVE of WWE 2K18 5 Things You Might Not Know! Target of 2K LIKES?
🔥 Watch ALL episodes here: https://www.youtube.com/playlist?list=PLkUxAx3urM92D1prY-3UkFGL9CeQbFjQX

The lesser known awesomeness continues with the following;

What is the series about? This series features a compilation of things you simply might not know about WWE 2K18. This could be secrets, hidden moves, unknown features, easter eggs, forgotten things from the older games, tips, tricks, facts or even just some general interesting cool bits and pieces. Some of these could be big things, others smaller things. Some of which will be new for WWE 2K18, and some that will be from the older games in the series. The key word in the series as always is MIGHT. The series is aimed at both new and old WWE 2K players – Some “Things” might be obvious to some, but might not be to others. Its important to keep that in mind.